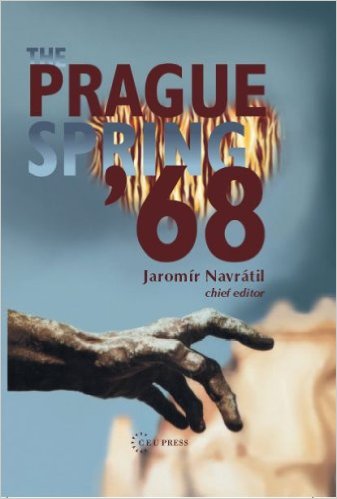 “I am happy that the co-operation between the National Security Archive in Washington and the Czech foundation, Prague Spring 1968, has resulted in this voluminous collection of documents which, I hope, will lead readers to a closer understanding of the dramatic events that the then-Czechoslovakia lived through three decades ago.”

“The Prague Spring '68 helps answer the question of why the Soviets invaded Czechoslovakia as it had Hungary, while it overlooked insubordination elsewhere .... The book was compiled by a committee of scholars in Czechoslovakia who combed their country's archives and with the help of the National Security Archive, a nongovernmental group in Washington, found documents from Soviet and other East Bloc files. Most of the letters and transcripts of meetings and phone conversations have not been published in English before.”

“This work, the first to document the invasion of Czechoslovakia from the viewpoints of the nations of the Iron Curtain and the West, is a spectacular contribution to the area of political studies .... This work is a must for scholars of political and social studies, as well as for historians. However, the historical and political content of this immense effort may appeal just as much to the non-scholar.”

“Th[is] volume constitutes an unparalleled resource of primary documentation on the events of 1968, which is of inestimable value for future researchers, and equally valuable for classroom use and for a broader attentive public.”

—- From the Foreword by H. Gordon Skilling

The Prague Spring ’68, published in 1998, was the first volume in the National Security Archive Cold War Reader Series published by CEU Press.  The product of a fruitful scholarly collaboration that began in 1992 between the National Security Archive and several Czech organizations, the volume was the first to provide such extensive documentation of a pivotal Cold War crisis from behind the Iron Curtain.

Much of the framework for the book emerged from a conference organized in Prague in 1994 by Dr. Jaromír Navrátil and Dr. Vaclav Kural from the “Prague Spring 1968 Foundation” and the Institute of International Relations in Prague, along with staff from the National Security Archive.  A key aim of the conference, “Czechoslovakia and the World, 1968: The New Archival Evidence,” was to bring to light documentation (along with eyewitness testimony) that had been hidden from the public for decades until the collapse of the Communist regime in late 1989.

Then-Czechoslovak President Václav Havel had previously appointed several of his former fellow political prisoners to a Government Commission of the Czechoslovak Republic for the Analysis of the Events of 1967-1970.  The Commission included the following members:

Many others in the Czech Republic, Slovakia, and elsewhere played a specific part in the volume’s creation.  The principal compilers, editors, and translators are noted at the top of this posting.  A full listing of contributors is in the Acknowledgements.   Two other individuals who have been steady partners in the overarching project and deserve special mention here are Dr. Vilém Prečan and Dr. Oldřich Tůma, successive directors of the Institute of Contemporary History in Prague.

The volume covers the same time period, 1967-1970.  Over the course of 140 documents, most of which were published here for the first time in English (and in many cases in any language), the collection takes the reader from the period that prepared the ground for the events of 1968 through the “Prague Spring” to the planning and execution of the invasion in August and finally to the aftermath when hardliners reasserted harsh controls over the Czechoslovak population.  A documentary epilogue takes events up to the end of 1989 when a group of most of the leaders of the Soviet “bloc” issued a joint statement apologizing for their “illegal interference” in the affairs of their partners in Czechoslovakia.

The following document excerpts give an idea of the content and breadth of sourcing of the materials, which include records from most of the Warsaw Pact member-states as well White House and CIA files from the United States obtained through the Freedom of Information Act.

The following are reproductions taken directly from the published volume.  They are numbered accordingly and each document image incorporates headnotes describing the context and significance of the item.

Document No. 61: “Problems with the Policy of Safeguarding the Internal and External Security of the State, Their Status at Present, and the Basic Ways of resolving them,” Czechoslovakia's Plans for Future Changes in Military and National Security Policies, July-August 1968 (Excerpts)

Document No. 72:  The "Letter of Invitation" from the Anti-Reformist Faction of the CPCz Leadership, August 1968

Document No. 77: Summary Report and Transcript of Telephone Conversation between Leonid Brezhnev and Alexander Dubček, August 9, 1968

Document No. 86:  Summary of Alexander Dubček's Meeting with János Kádár at Komárno, August 17, 1968

Document No. 109:  Minutes of the U.S. National Security Council Meeting on the Soviet Invasion of Czechoslovakia, August 20, 1968